There are four sections in this post
1.    Definition of Key Lookup
2.    How to eliminate a Key Lookup
3.    Further aspects
4.    DMV Query to identify and prioritize Key Lookups

Consider a Customer table as follows which I have populated with 1M records.

We want to query this table for all customers’ First Name and Last Name who have a DTCreated in the first week of January 2010.

We can see that this performs a Clustered Index Scan. Without an index on DTCreated, it has no choice but to scan the entire base table picking off records that match the DTCreated criteria.

Next, we create an index on DTCreated. This will improve the query by allowing for a seek operation on the DTCreated values and thereby eliminating the full table scan of all 1M records.

But this is where we see the introduction of the Key Lookup operation. Because the index does not specify TXFirstName and TXLastName (which are in the SELECT clause) the plan must reference the base table to lookup those values.

While in most cases better than a full table scan, a Key Lookup still involves additional reads, and so if possible Key Lookups should be eliminated. We can eliminate the Key Lookup which references the base table by INCLUDE-ing TXFirstName and TXLastName (detailed in the Key Lookup properties) in the index thereby covering the query. Essentially, the index is functioning as a separate table which contains all the columns required for the query and is sorted appropriately for the search criteria. 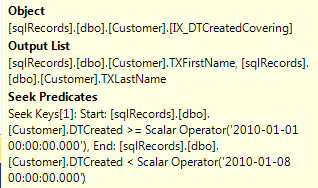 This section covers 2 additional aspects of covering indexes and Key Lookup elimination: (a) Index Key versus INCLUDEd columns and (b) index benefit versus cost.

Prior to SQL Server 2005, the only way to have an index cover a query was to append the needed columns to the index key. Using our example, such an index would look like this.

The problem with this approach is a wide index key reduces the number of records that can fit on intermediate pages within the index b-tree, and so the depth of the tree likely will increase requiring additional reads to get to the same records.

The lesson here is to put search-interesting columns (aligned to the WHERE clause) in the index key and other columns referenced (SELECT and ORDER clauses) in the included section. Depending on the situation it may make sense to widen the index key with ORDER clause columns.

The second further aspect of indexes to consider is cost versus benefit. An index provides benefit for reads but costs on inserts, updates, and deletes – because these operations must update all affected indexes. So whereas IX_DTCreated is not updated when a value of TXFirstName has been changed, IX_DTCreatedCovering is updated. It is always wise to review Key Lookups for possible elimination, but it will not make sense to implement an index if the cost outweighs the benefit.

Even the best maintained system will end up having unnecessary Key Lookups as sprocs are updated to return additional columns not accounted for when indexes were originally created. And as we all know, many databases exhibit no evidence that tuning items such as covering indexes have been even considered.

Fortunately, the dynamic management views (DMVs) offer visibility into Key Lookups. The DMV query below returns data for database objects with Key Lookup operators in their execution plan. One of the columns returned is the XML representation of the query plan, which when selected within an SSMS query window will display the graphical query plan. I do not claim that this is best DMV query for this data, but it is simple and works well.

Having removed from our example all non-clustered indexes except IX_DTCreated which we know uses the Key Lookup, we can see that this DMV query returns a record for the GetData sproc. 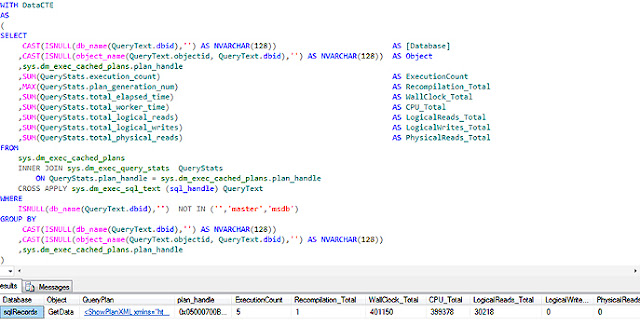 Upon selecting the QueryPlan XML link, we see the graphical representation with a Key Lookup operator (same as from the end of section 1) and can investigate and update the index to eliminate the Key Lookup - again if it makes sense.


It should be noted that this DMV covers only sprocs and UDFs. In-line SQL queries that use Key Lookups would not be reported here.

Hope this is of some help.

-Regan
Posted by Regan Wick at 7:32 PM No comments: